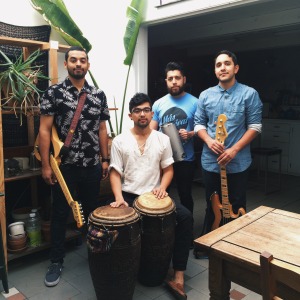 One may never guess at first listen a group of five California natives hailing from the heated  Inland  Empire  would  evoke  such  cultural  richness.    Throughout  the  full  length,  Dany  “Choco”  Gomez  plucks  a  tico/soukous  style  of  rhythmic  and  melodic  fusion.  The  drive  of  the  band  further  pronounces  mostly  Punta,  Puya,  Champeta  and  Merengue  in  a  solid  three  piece  percussion  back  bone  chaired  by  Eduardo  Salvador  Valencia,  David  “Dirty”  Quintero  and  Mark  Villela,  grasping  congas,  caja  and  guacharaca.    Finally,  the  quintet  is  carried  through  with  bass  and  sometimes  sax  by  Hector  “Toto”  Chavez.  A  call  and  response  set  of  chants  illuminate  vocals  led  by  Choco  and  sometimes  Toto,  forcing  movement beyond  hips  and  feet.

The album hits the ground running with single  Valle Moreno, which’s title may sound  like  an  Inland  Empire  city,  however  paces  a  trance  into  that  of  a  1970’s  Luanda  nightclub.  Choco  grazes  guitar  rhythms,  as  the  collective  clutch  an  impeccable  clap  track.    Another  pun  titled  track;  Os  Quitapenas,  invites  homage  to  the  parties  of  1960’s  psychedelic  Peru,  however  the  name  foreshadows  an  Angolan  highlife  festival  in  its  instrumental  reckoning.

Guayabo,  my  personal  favorite,  written  by  Eddie  and  arranged  by  QUINTAPENAS  themselves,  perceives  as  a  fusion  of  emotional  Tropicalia  singing  and  strumming,  held  together  by  grooves  of  an  everlasting  afro-­beat.   However,  this  jewel  is  actually  a  true  story  on  Eduardo’s  trip  to  San  Basilio  de  Palenque.

Also  included  in  the  work  are  previously  released  singles Justicia and ever so flirty Papaya,  which perform  more  like  occasions  rather  than  songs.  With  consistent  playful  timbres  and  tempos  Eddie,  Dirty  and  Mark  carry  the  party  in  every  meter  and  measure.

The final track, Vamos a Mi Casa sets free the Palenque roots of Afro-Columbian culture  with  the  simple  story  of  get  the  girl,  but  complex moves of  Toto’s  bass  dance,  and  Choco’s  melodic  octave  jumps. 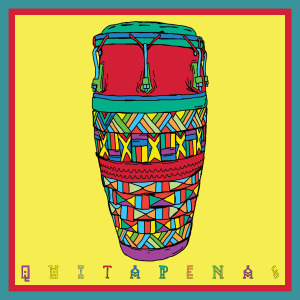